The Ashby brought movies to a Black audience


You could, if you wanted, travel to the Fox, on Peachtree Street, and walk up a few hundred steps on the fire escape outside the building, and sit in the “Buzzard’s Roost,” which was reserved for “colored” patrons.

“But that was not my cup of tea,” said Stemley, now 79 and a retired high school counselor.

Instead, she would walk a few blocks to the Ashby Theater, on the corner of Ashby and Hunter streets, where a feature, a newsreel and a cartoon cost a dime. 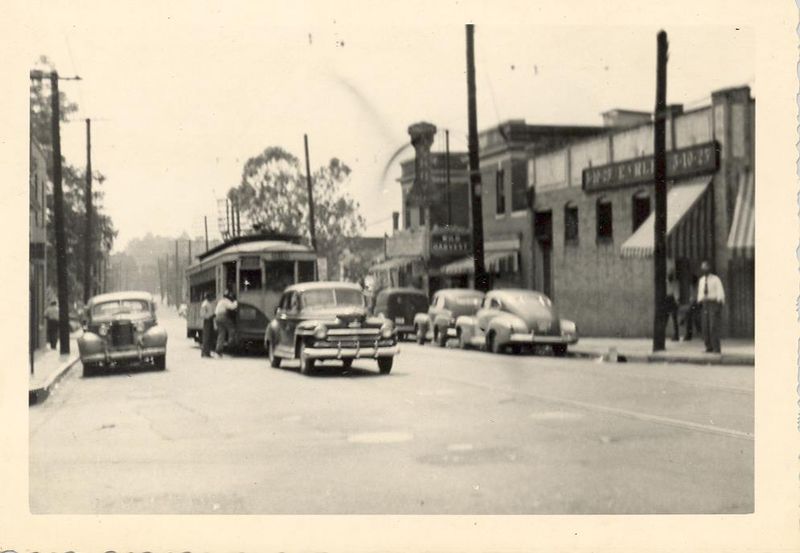 The Ashby Theater can be seen in the background of this image from the 1940s. It opened in the Washington Park neighborhood in the 1930s a part of the Bailey’s chain of movie theaters that catered to Black audiences. In 2020, the dilapidated theater, which still retains its distinctive marquee, was placed on the Georgia Trust for Historic Preservation’s list of 10 Places in Peril. This photo was taken from the vantage point of Hunter Street (today’s Martin Luther King Jr. Drive) with Ashby Street (today’s Joseph Lowery Jr. Boulevard) crossing it in the foreground. (Skip Mason Archives; used with permission)

Christi Jackson, chair of The Conservancy at Historic Washington Park, said the Ashby was located on a bustling corridor where “Black people had the opportunity to shop, to congregate, go to church, educate themselves. To live in peace as humans,” Jackson added, “as opposed to what segregation provided anywhere else in the city.”

On Saturdays, the matinee drew youngsters, and the theater was almost like a trusted babysitter. R. Candy Tate, an adjunct professor of art history at Clark Atlanta University and a member of the board of the Georgia Trust for Historic Preservation, said “My uncle, who has since passed, as a child, he would go in and pay 10 cents, and be able to stay all day.”

Tate is part of a non-profit group trying to rescue the Ashby, and the Ashby needs rescuing.

The building has been empty for years. The disintegrating roof has not kept out the rain.

Tate was inside the building last fall. Asked what she saw, she said, “not good things. I saw the sky. We’ve got a roof issue.” This is why her non-profit organization, Culture Centers International, nominated the Ashby for the list of top 10 “Places in Peril,” announced each year by the Georgia Trust.

“It’s really important, I think, for us to remember that period of our history, where African Americans had to start and maintain their own community landmarks,” said Mark C. McDonald, president and CEO of the Trust.

“This building, while it’s in poor condition, still has a lot of potential to serve the community,” he said.

The Ashby is an emblem of the time when Black Atlantans had a parallel economy of Black-owned businesses, catering to and patronized by their own. Auburn Avenue in the Old Fourth Ward was, at the time, the Fifth Avenue of Black America. Farther west, Hunter Street, which became Martin Luther King Jr. Drive, and Ashby Street, which became Joseph E. Lowery Boulevard, hosted a similarly healthy community.

Integration addressed a serious ill in society, but it undercut the support for that economy and many of those businesses disappeared. “When integration came, it was something we should have had all along, but our business people could not keep up financially,” said Raymond Gambrell, 85, who attended Booker T. Washington High School and went to see Westerns and Tarzan movies at the Ashby.

Gambrell also patronized movie houses in the Auburn Avenue area, including the Royal and Theatre 81. 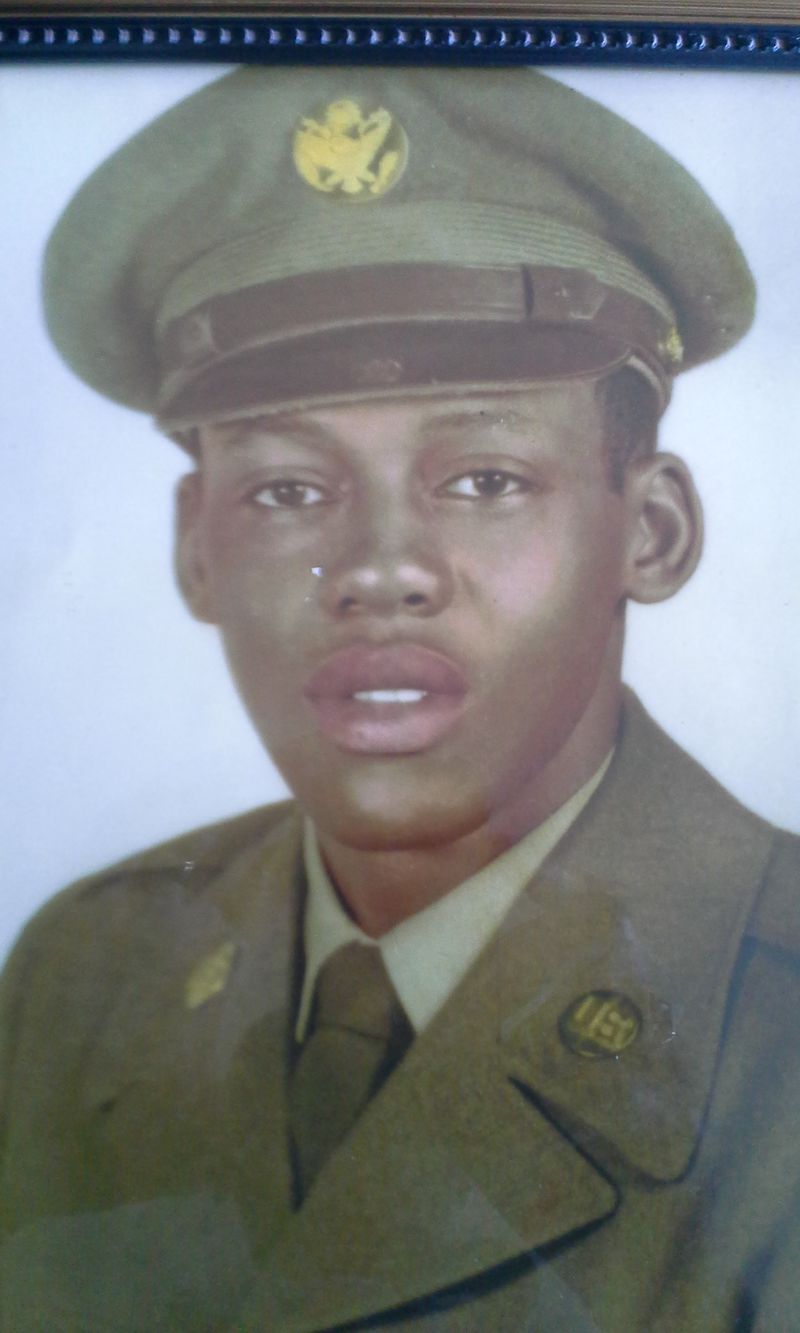 Southwest Atlanta native Raymond Gambrell, 85, who served in radio communications in the Army, said as a teenager going to a segregated theatre made you feel like a “second grade citizen.” Courtesy: Raymond Gambrell

Matthew H. Bernstein, chair of the department of film and media at Emory University, explores movie culture and the Black and white movie houses of the city in an upcoming book, “Segregated Cinema in a Southern City,” written with the late Dana F. White.

He said the Royal, which occupied the Oddfellows Building, and Theatre 81, on Decatur Street, were both operating by the late 1920s, and were part of the Bailey Amusement Company, owned by a pair of Jewish brothers.

When the Baileys built the 300-seat Ashby in 1934, in the depths of the Great Depression, it provided employment for African American construction workers and it underscored the growth of a middle-class Black community on the Westside, powered by the Atlanta University economic engine.

It was originally called Bailey’s New Ashby Theater, but the patrons simply called it the Ashby. The Ashby gave its neighborhood an anchor.

“Black theaters were the center of the community,” said Bernstein, “a place to gather to affirm who you were and enjoy entertainment together.” 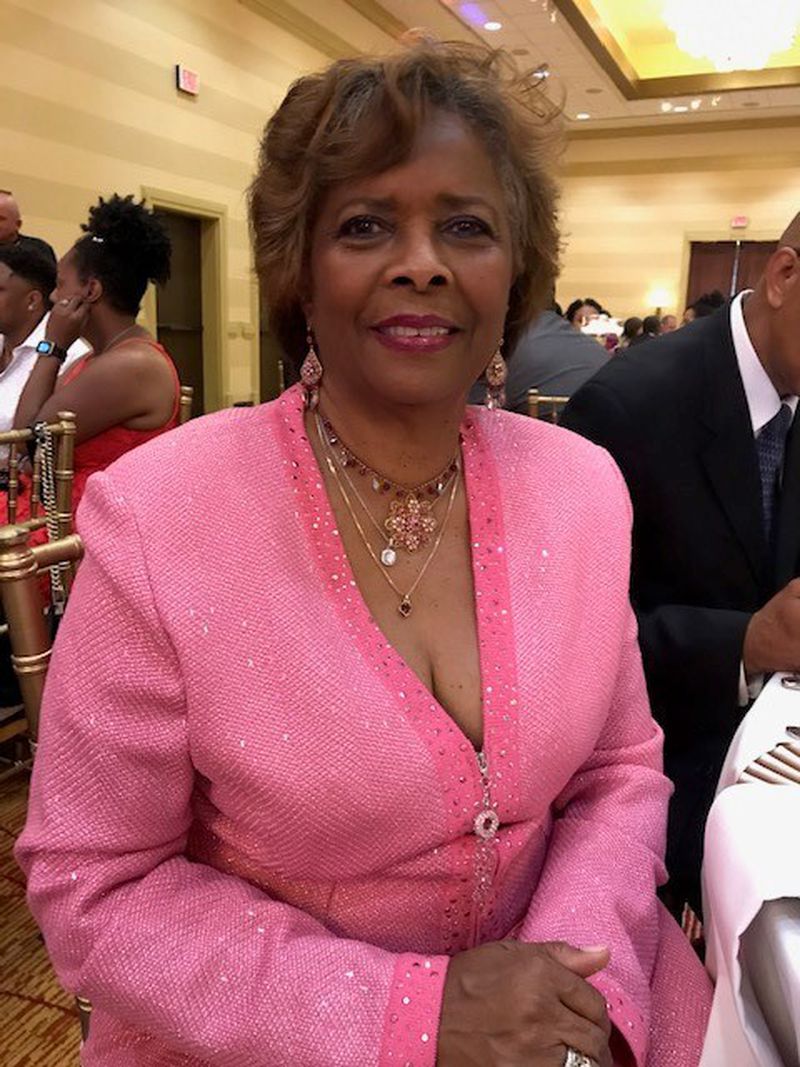 When she was a little girl, Gwendolyn F. Elmore, 79, a retired schoolteacher and principal, watched the Lone Ranger, Hopalong Cassidy and other heroic cowboys in the Westerns that played at the Ashby Theater. Courtesy: Gwendolyn F. Elmore

Gwendolyn F. Elmore, 79, a retired schoolteacher and former principal of John Hope Elementary School, walked to the Ashby by herself as an 8-year-old, bringing a dime for the movie and another dime for the “delicious” popcorn. “Almost everybody in the community would be at the Ashby on Saturday,” she said. “It was almost like a meeting place.”

The theater was still showing movies in 1959. At some point thereafter the auditorium hosted a dinner theater called the Edifice, while several businesses took up quarters in the front of building, including an ice cream parlor and a travel agency. All are gone.

Elmore said it makes her sad to see the Ashby and other businesses boarded up.

But change is coming, while the neighborhood conservancy group is working to preserve and highlight the rich history of Washington Park. New residents are pouring into the Westside, a tide that will swell as the Beltline’s Westside Trail is connected to other completed portions of the popular artery.

“This whole area is sprouting out,” said Gambrell. “You would never see European Americans before, but now they’re on the street, buying homes and fancy cars.”

Will the Ashby be part of this growth, or will it be torn down and replaced? The Ashby is owned by the Atlanta Business League, a group of area business owners, which hasn’t yet announced a plan for the structure.

It has been, of course, a terrible year for movie theaters, paralyzed by COVID-19. But Bernstein suggests that the Ashby could develop a personality like a miniature Fox, as an historic artifact, a meeting place, a performance venue, as well as a place to watch a film.

There is only one independent movie house inside the Perimeter, the Plaza Theatre at North Highland and Ponce de Leon avenues, said Bernstein. Certainly, he suggested, there is room for another.

Throughout February, we’ll spotlight a different African-American pioneer ― through new stories and our archive collection ― in the daily in our Living and Metro sections Monday through Sunday. Go to myAJC.com/black-history-month for more subscriber exclusives on people, places and organizations that have changed the world, and to see videos on the African-American pioneer featured here each day.

Important dates for the Ashby Theatre

1934: The 300-seat New Ashby Theater opened at the corner of then Ashby and Hunter streets (now MLK Jr. and Joseph Lowery boulevards). It was part of the Bailey Amusement Company.

1974: The theater closed after integration happened.

Years following: The auditorium became a dinner theater; other businesses took up space in the front, including an ice cream parlor and a travel agency. The businesses eventually closed.

1981: The seats are removed from the auditorium.

1995: The exterior of the old Ashby Theatre can be seen in the film “Soul Survivors,” which featured Isaac Hayes.

2021: The theater is listed on “Places in Peril” by the Georgia Trust for Historic Preservation.