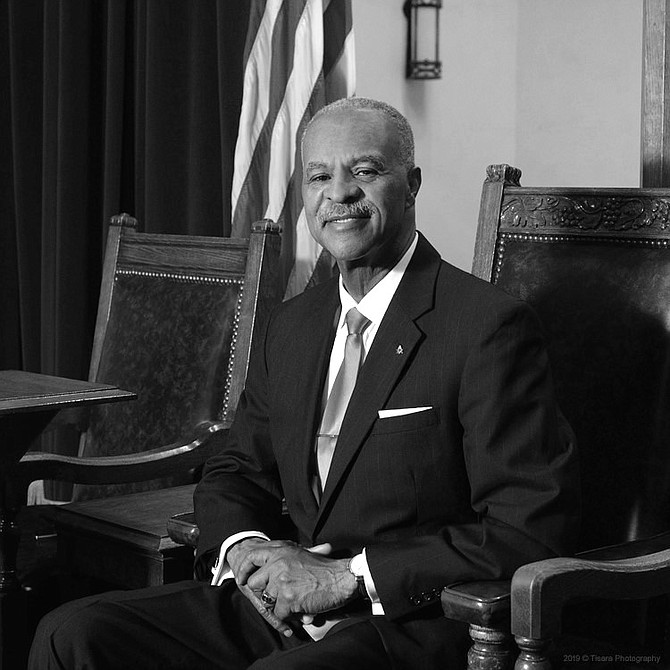 What is right? Actively serving your community in any capacity you see fit. Here you will find McArthur Myers doing just that. He is engaged in many community efforts to revitalize and restore the rich African American history of Alexandria. Since his early years, serving others has been a passion. He states “You got to step up and step in” as a call to action for all. His diligent community service expands from social justice and advocacy to preserving the history of African Americans in Alexandria. Here is why McArthur Myers is a Living Legend.

Born and raised during segregation, Myers faced many challenges as he was the “first” at critical times of his life. During his formative years, he strived to be around like-hearted individuals. He knew he wanted to pursue the desires of his heart with his passion for helping others in the right way.

Myers attended Charles Houston Elementary School up until fifth grade. He and his sister, Lucille, were among the first African Americans to attend Prince Street Elementary School. He was among those who integrated the Alexandria Boys Club and the Club’s Boy Scout Troop. Upon graduating from T.C. Williams High School, Myers began his studies at American University where he majored in Administration of Justice. Myers worked for over 40 years with the District of Columbia Government Department of Mental Health.

Myers was introduced to advocacy and politics by his mother, Carrie Myers. He shadowed her moves as she served as a “Block Captain” during the Civil Rights era. His strength to serve was enhanced by his second “mom,” the late Vola Lawson (former Alexandria City Manager), a Living Legend in her own right. Myers was mentored by Vola and her family and attended many Human Rights struggles in the community. “She helped me to become the man I am,” he said.

In 2012, Myers became a Freemason with Universal Lodge #1, the oldest Prince Hall Lodge in the Commonwealth of Virginia. He petitioned the Virginia Department of Historic Resources to acknowledge the historic group. In March 2018, the Universal Lodge #1 received its recognition with a new historical marker. He served as the 174 Worshipful Master. Currently, he serves as the Grand Historian for the Most Worshipful Prince Hall Grand Lodge of Virginia.

“Alexandria offers an opportunity to be the best and to enhance the quality of life for all, young and old.”

In September of 2016, Myers became the first African American member of the George Washington Masonic National Memorial Association. He recalled a time when African Americans were not welcome on the grounds of the Memorial. It was a significant moment to share his story at the Memorial in 2016. In 2018, he arranged the first Prince Hall meeting at the Memorial. He currently serves on the sub-committee for the recognition of the 100-year cornerstone rededication.

Myers is a dedicated advocate for historical landmarks identifying the significant impacts of Alexandria’s African Americans within the community. He participated in the placement of eight historical markers throughout the City. Some of those historic buildings are Roberts Memorial United Methodist Church, Beulah Baptist Church, Third Baptist Church and the Universal Lodge #1.

Myers was involved in the partnership to integrate the Freedom House Museum into the Alexandria Museum System. He is presently working on the Alexandria African American Heritage Trail Project in an effort to recognize the contributions of African Americans to Alexandria’s history. The African American Heritage Trail Committee is in the process of mapping out a trail that will run along the Waterfront beginning at King Street and going North through Fishtown, the “Berg,” Canal and the “Hump” communities. It will also continue south of King Street along the Waterfront towards Jones Point.

In 2019, Myers was honored by the Alexandria Archeological Commission with the Ben Brenman Archeology in Alexandria Award during an awards ceremony at City Hall. Myers was presented with the Outstanding Community History award in recognition of his dedication to the preservation and interpretation of Alexandria’s African American heritage.

A proclamation by City Council praised Myers, noting that through organizations including the Historic Alexandria Resources Commission, the Society for the Preservation of Black Heritage, and the African American Heritage Trails Committee, Myers has worked to interpret Alexandria’s history at the Universal Lodge #1, Third Baptist Church and the Historic Waterfront.

Myers resides in Alexandria and continues to advocate for historical representation of African Americans in the City. Myers stated, “Alexandria offers an opportunity to be the best and to enhance the quality of life for all, young and old.”

He also stated, “Stand on the shoulders of others,” while he serves his community. Myers’ motto is “One city, many stories.” He hopes to be remembered as an author of the stories that impacted African American History and social justice in Alexandria.