South Africa-headquartered fishing and processing firm Oceana Group saw what it described as a “resilient” first six months to its financial year, and it expects relative stability going forward. 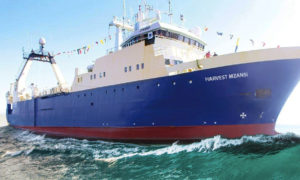 The performance of its African operations was strong, driven by a sustained demand for canned fish, horse mackerel, and hake, and supported by firm pricing across all sectors.

“Operational efficiencies and a solid performance from the cold storage segment following optimization of capacity has bolstered results. As expected, performance of the fishmeal and fish oil segment in the [Daybrook Fisheries] was curtailed on the back of the lower prior season catch.”

During the six-month period the group optimized its South Africa fishmeal fleet and cold storage capacity. Associate and joint venture losses reduced materially after the closure of its Angolan fishmeal operations, and thanks to higher volumes processed through the Namibian canning operation, it said. Previously it had only referred to suspending operations in Angola, which were loss-making.

Group operating profit increased by 9% to ZAR 605m, driven by growth of 18% in the African operations, and offset by a reduction in the US where Daybrook’s operating profit declined by 23%.

The strong performance of the Africa operations together with a lower net interest expense resulted in group profit before tax increasing by 10% to ZAR 466m.

“This is an excellent result, and I’d like to pay tribute to our people at Oceana, who have really risen to the challenge. During the first days of lockdown, they responded incredibly to our call to arms and we recorded 100% attendance at work,” said group CEO, Imraan Soomra.

“Our strategy of both customer and geographic diversification is paying dividends. Not only are we well-positioned across geographies, but our customers are located right across the world, with fresh fish being in demand in Africa and Europe, pet food in the US, fishmeal in Europe, Africa and Asia, and canned fish in South Africa. What has been critical in the COVID-19 environment is that our products are primarily consumed in-home, which has protected us from closures in the tourism and hospitality industries.”

Looking beyond the past six months, Oceana said the positive trading of all its products has continued into April and May, aided by signs of recovery in the South African pilchard resource and improved landings of industrial fish both there and in the Gulf
Menhaden in the US. Live lobster processing and sales into China have resumed, it added.

“Canned pilchard demand has remained resilient into April and May, demonstrating volume growth against the prior period, and our ability to continue servicing this demand is strong given our well-stocked inventory levels. Canned fish margins will however be challenged by the increased cost of imported fish given the weaker rand.”

Global demand for fishmeal and oil remains firm, supported by increased Chinese production levels and positive shifts in in-home farmed fish consumption, the firm said. “Global supply will be impacted by Peruvian ability to manage COVID-19 disruption risk and bolstered by good landings in South Africa and the USA, which are currently tracking materially above the prior period.”

In South Africa, the cabinet has approved the extension of fishing rights to December 2021 with exemptions granted to existing rights holders to continue fishing based on current allocations.

“We expect our operations in the Western Cape to be negatively impacted by COVID-19 as the number of infections peak, with a higher risk of business interruption in our hake and horse mackerel segment. The risk of a large-scale impact in the immediate future is however mitigated by the diverse and wide footprint of our operations, the geographic spread of our customer base and the high levels of in-home consumption of our various product offerings.”

Oceana’s canned fish and fishmeal operations in Africa saw strong growth in operating profit of 19%, due to improvements in both sides of the business.

With canned pilchard volumes at 4.5 million cartons (March 2019: 4.4 million cartons), the canned fish business delivered further growth in an environment where “the disposable income of consumers is under considerable pressure, off the back of an 11% volume growth in the prior period”.

This was enabled by a strategy of maintaining relative affordability and promoting the versatility of its Lucky Star brand, it said. Including the effect of a price increase in November, overall revenue growth for this segment was 4%.

“I am delighted that our pricing, affordability and accessibility strategy for Lucky Star canned fish has paid off,” said Soomra. “We have price points that are really attractive to cash-constrained consumers. Strong availability has also been critical to servicing demand, with six months of inventory available as at the half-year.”

Canned fish production has been largely supplied by imported frozen fish given that the South African pilchard total allowable catch (TAC) remains at a cyclical low, the firm said. Consistent supply of frozen fish for Lucky Star’s canned pilchard products continued to benefit canneries in South Africa and Namibia from both a production and labor efficiency perspective.

The canned fish sales price increase in November, together with the lower cost of local production, offset the impact of the weaker rand on imported frozen fish. This resulted in the canned fish business delivering improved performance for the period.

Profitability of the African fishmeal and fish oil business improved as a result of improved fish oil pricing, the weaker rand, cost savings from the South African fleet optimization and elimination of operational losses following the closure of the Angolan operation.

Landings at Oceana’s US operation, Daybrook, in October 2019 were below historical averages. This together with the lower oil yields experienced in the prior season reduced fish oil stock available for sale during the closed season period to March 2020, resulting in lower revenue for the reporting period.

“Positively, fishmeal sales volumes have performed better than expected and remained strong with continued demand from the USA pet food manufacturers. Pleasingly, overall pricing for both meal and oil has increased by 3% over the prior period.”

The African horse mackerel, hake, lobster and squid segment delivered 9% growth in operating profit, driven by a strong performance from the horse mackerel and hake businesses.

Demand for Namibian and South African horse mackerel remained positive resulting in increased sales volumes and improved US dollar pricing. In Namibia, the ministry of fisheries announced a 5% decline in the TAC in relation to the prior period. In South Africa, quota available to Oceana through own and joint venture allocations remained in line with the prior period.

“We will continue to explore additional partnership opportunities with new rightsholders while continuing to play a positive role in the development of the Namibian fishing sector.”

The 2020 hake offshore TAC remained in line with the prior period, it added. “A strong improvement in revenue and operating profit for this business is the result of continued European demand for products consumed in-home, the weaker rand, and lower fuel prices.”

The west coast rock lobster TAC remained unchanged. Profitability was negatively impacted by poor catch rates and the closure of the Chinese market for live lobster following the COVID-19 outbreak. In response, fishing was slowed down and product frozen for sale into other geographies at lower margins.

There was no change to fishing rights allocated to the squid business. Poor industry catches and lower opening inventory levels resulted in a reduction of sales volumes and lower profitability.